Bonus toy capsule awards are only available with a coin or during free spins.

The toy capsules will open and reveal the prize award amount.

The toy awards are as follows: 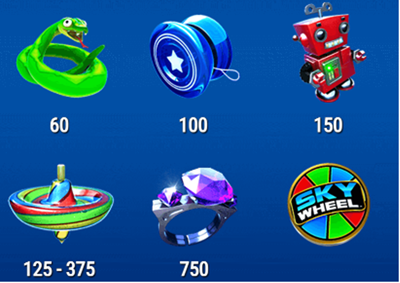 Pick Until You Pop Bonus Game

Pick Until You Pop. The bonus game is only available as an award on the Sky Wheel TM.

Players pick from a field of 30 prize capsules. The capsules contain one of the following awards:

ALL AWARDS SHOWN IN CREDITS, UNLESS OTHERWISE STATED, AND ARE BASED ON YOUR CURRENT BET OF XX CREDITS.