Rise of the Dragon

SPIN / PLAY: Click on '▶ / 🔄' or press spacebar to start the game. After the reels stop spinning, any winning combinations on the selected lines will be paid according to the paytable.

STOP: Once play is initiated the '▶ / 🔄 ' button becomes a '⏹' stop button. Click this button or press space bar to stop reels from spinning. The '⏹' button has no effect on the game outcome.

MAXIMUM BET: If available Click on the 'MAX' button to set the maximum bet.

GAME HISTORY: This can be viewed by clicking on the 'clock / 🕓' button. 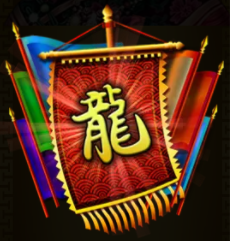 Highest win awarded only on each scatter combination, if applicable.

All Wins are added.

During paid games or FREE GAMES FEATURE, 6 or more

symbols that triggered the STICK N SPIN FEATURE are held in position.

If one or more additional

symbol appears, those symbols are also held in position and the number of free spins remaining is reset to 3.

Paytable prizes are not awarded during the STICK N SPIN FEATURE.

The STICK N SPIN FEATURE is completed when either no free spins remain or a Grand Bonus is awarded.

During paid games, 3 or more

During the FREE GAMES FEATURE, any 3 or more

symbol added will be increased on every spin for the initial first 6 free spins.

The Grand Bonus is awarded when 15