GAME HISTORY: This can be viewed by clicking on the 'clock' button.

substitutes for all symbols except

appears on reels 3, 4 and 5 during paid games only.

appears during the paid game only.

All Wins are added.

Any 5 or more 'Wheel' symbols trigger the Wheel Feature.

The wheel shows segments with winning values, and a pointer indicating the winning segment when the wheel stops spinning.

When the Wheel Feature is triggered with 5 or more 'Wheel' symbols, the value shown in the winning segment is multiplied by the appropriate multiplier (X) - as displayed in Multiplier Table except Grand Bonus. 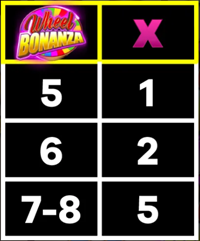 Number of free games awarded is as per below table 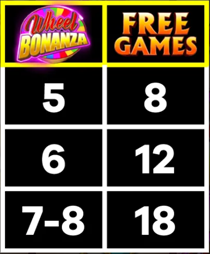 appears on reels 2, 3 and 4 only during the Free Games Feature.

During the Free Games Feature,

appears on reels 1 and 5 only.

appears on reel 1 and 5, 3 Lucky Multiplier Bonus Spins are awarded.

appear during the Lucky Multiplier Bonus Spin only on reel 3 and substitutes for all symbols.

During the Lucky Multiplier Bonus Spin,

substitutes in a winning combination, the prize for that win is multiplied by 2, 3 or 5 respectively.

After the Lucky Multiplier Bonus Spin Feature, the game returns to the remaining free games of the Free Games Feature, if applicable.

cannot appear during the Free Games Feature and the Lucky Multiplier Bonus Spin.