GAME HISTORY: This can be viewed by clicking on the 'clock' button.

substitutes for all symbols except scatters and

appears on reels 3, 4 and 5 during paid games only.

appears on reel 3 during paid games only.

participates in a win the pay for that win is doubled. 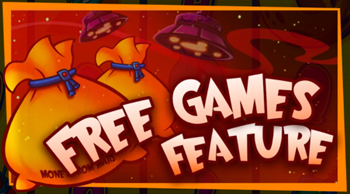 During paid games, 3 or more

The feature options are :

1. 10 free games with all wins multiplied by 5 except

2. 15 free games with all wins multiplied by 3 except

3. 20 free games with all wins multiplied by 2 except

During the Free Games Feature ,

Any 3 or more scattered

will trigger an additional 10 free games with the same initial multiplier. 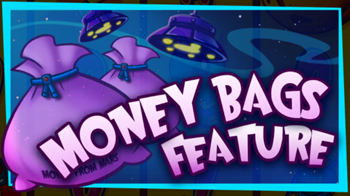 are randomly placed and are held in that position when entering to MONEY BAGS FEATURE.

If one or more additional

symbol appears, those symbols are also held in position and the number of free spins remaining is reset to 3.

Paytable prizes are not awarded during the MONEY BAGS FEATURE.

The MONEY BAGS FEATURE is completed when either no free spins remain or a Grand Bonus is awarded.

Money Bag Prizes are awarded at the end of the MONEY BAGS FEATURE.

The Grand Bonus is awarded when 15

are collected during the MONEY BAGS FEATURE.