SPIN / PLAY: Click on '▶ / 🔄' or press spacebar to start the game. After the reels stop spinning, any winning combinations on the selected lines will be paid according to the paytable.

STOP: Once play is initiated the '▶ / 🔄 ' button becomes a '⏹' stop button. Click this button or press space bar to stop reels from spinning. The '⏹' button has no effect on the game outcome.

MAXIMUM BET: If available Click on the 'MAX' button to set the maximum bet.

GAME HISTORY: This can be viewed by clicking on the 'clock / 🕓' button.

appear during paid games and Free Games Feature only.

appear during the MONEY UP FEATURE only.

All wins begin with leftmost reel and pay left to right on adjacent reels, except scatters, ladder prizes and Bonuses.

All wins on lit lines only except scatters, ladder prizes and Bonuses.

Any 3 or more scattered

During the Free Games Feature, when

appears on any reel, all symbols on that reel will be transformed to

For each free game, either the number of 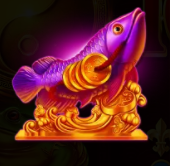 will be randomly increased.

During the Free Games Feature, any 3 or more scattered

Bet and lines played are the same as the game that triggered the FREE GAMES FEATURE.

triggers the MONEY UP FEATURE with 3 free games.

The Ladder Prizes are multiplied by the sum of the

from the corresponding reel.

All level 1 Ladder Prizes on the top of each corresponding reels are activated.

If one or more

appearing on each corresponding reel.

When the current Ladder Prize reaches its penultimate level, the

may appear in the corresponding reel.

When there are no more free games remaining, the current highlighted Ladder Prizes are awarded.