Return to the snow-capped forest of fortune in Siberian Storm Dual Play.

The Dual Play feature brings double the wins and double the fun in this enhanced version of the IGT classic Siberian Storm. Enjoy the excitement of two games sharing a massive 10 symbol-high centre column, sporting 10-high Wild symbols to enhance both games!

Press the left arrow (–) to decrease the coin value.

Press the right arrow (+) to increase the coin value.

Displays the current number of ways being played.

Press to submit the bet and spin the reels.

After selecting the desired bet configuration, press AUTO SPIN, and choose how many games to play at the current bet settings.

Auto Spin plays the specified number of games until the STOP button is pressed, a bonus is triggered, or the balance is insufficient to spin again.

Auto Spin is only available in approved jurisdictions.

When the bet is set to 150 coins, two separate games are activated.

Symbol wins are counted across the top 3x4x10x4x3 game separately from the bottom game.

When the bet is set to 75 coins, only the top 3x4x10x4x3 reel set is active, and results on the bottom reels are not counted towards wins.

With the MultiWay Xtra feature, each game has 1440 ways to win on every spin. MultiWay Xtra wins pay for matching symbols in any position in adjacent columns, starting from the leftmost column or the rightmost column. More than one matching symbol in the same column multiplies the award. The Wild symbol substitutes for all symbols except for the Scatter and Bonus symbols. Only the highest paying MultiWay Xtra win for each symbol is paid per game per spin.

Example of a MultiWay Xtra payout:

The following diagrams show two sample reel outcomes using the MammothTusk symbol for the top and bottom games. Because there is at least one MammothTusk or Wild symbol in each of the first four columns, the player has won the 4 MammothTusk MultiWay Xtra win which pays 12 coins per way. 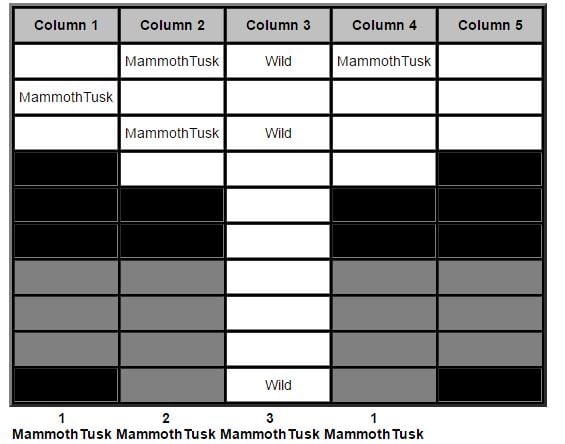 To determine the payout for this combination:

The actual amount won in currency is based on the coin value.

With the Stacked Wilds feature, columns 2, 3, and 4 are loaded with groups of four or more consecutive Wild symbols. Column 3 has even more Wild symbols with stacks of 10-high symbols.

In the Free Spins Bonus, the Stacked Wilds feature is even richer and more plentiful.

The Free Spins Bonus is triggered by getting a Bonus scatter symbol in any position on five consecutive reels, on either the top or bottom game.

Retrigger the Free Spins Bonus by getting a Bonus scatter symbol in any position on five consecutive reels, on either the top or bottom game. The Bonus can be retriggered multiple times, up to a maximum of 480 free spins per bonus.

Free spins are played with both the top and bottom games active, regardless of the total bet amount.

Free spins are played at same coin value as the triggering spin.

Misuse or malfunction voids all pays and plays.

MultiWay Xtra wins pay for the same symbol in any position in adjacent columns within a game.

Only the highest paying MultiWay Xtra win for each symbol is paid per spin.

MultiWay Xtra wins are multiplied by the coin value.

Wild symbol appears on columns 2, 3, and 4 in the base game and in the Free Spins Bonus.

Only the highest scatter win is paid. Scatter wins are multiplied by the coin value.

Scatter wins are independent from MultiWay Xtra wins and are also added to the total amount paid.

Wins are shown in currency.

In some jurisdictions, regardless of bet size, there is an award cap on any single transaction. See the paytable for details. A transaction includes the results of the Free Spins Bonus plus the outcome which launched the bonus. If the award cap is reached in the bonus, the bonus ends immediately, even if there are remaining free spins.

Expected Payback
In accordance with fair gaming practices required in most legal jurisdictions worldwide, each and every game outcome is completely independent. The odds of getting any particular outcome are always the same.

The odds do not vary based on prior outcomes, bet size, balance size, time of day, day of week, etc. For example, if the top award is won on a given play of the game, the chances of winning the top award on the next play are exactly the same. Likewise, prior losses do not change future odds.

The expected payback reflects the theoretical return across a very large number of plays by numerous players over an extended period of time. The results for any given player over a play session can vary widely from this long-term, expected average in either direction. The fewer the number of games played, the wider the normal variance of actual payback that may be experienced.

The maximum win from a single game is £250,000 or 10,000xBet - whichever is reached first (or currency equivalent. Other Operator limits may apply).