Xi You Ji adventure slot is based on a truly legendary Chinese novel published in the 16th century, during the Ming dynasty, known in English as Journey to the West. Xi You Ji is one of the four great classical novels of Chinese literature. The story details the journey and pilgrimage of Xuanzang, a Tang dynasty Buddhist monk who went to explore the Western regions of Asia.

The first bonus game is the ‘Lantern Bonus’ which is a special progressive bonus where each win fills the bonus lanterns. As players achieve milestones, the accumulated bonuses get released, including cash prizes, sticky wilds, free spins and even the chance to spin the jackpot wheel.

The second bonus game is ‘The Sacred Journey’. During this bonus feature, Xuanzang stands in front of a 5x5 grid where the player gets to pick tiles and reveal prizes to boost their winnings, including multipliers, cash prizes and more.

Xi You Ji is a riveting adventure slot that will transport players to a mystical and alluring world filled with adrenalin and rewards!

There are 25 winning lines in Xi You Ji. The wins are counted from left to right.

The game progresses throughout the play session. There аre waypoints represented by 5 lanterns on the left side of the reels. Every time, when there is at least one winning line per spin, а lantern fills up with light.

Filling each of the first four lanterns gives the player one of the following awards:

Filling the 5th lantern gives special reward – the player is presented with a jackpot wheel, which contains 5 different types of Jackpot:

Once the 5th lantern is filled and the player wins one of the five jackpots, the lanterns return to their initial stage and the player can start filling up the first lantern again. 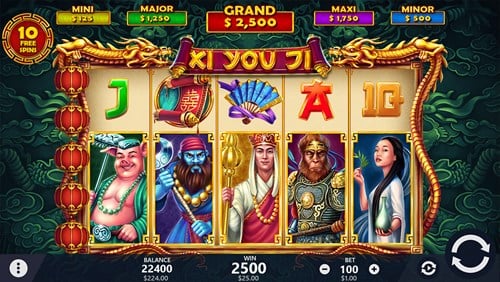 The Sacred Journey bonus game is triggered when 3 Bonus symbols appear on reels 1, 3 and 5.

The player begins their journey in search of the three characters. There are 5 rows of tiles, each row containing 5 tiles. The player starts picking tiles one-by-one from the first row. Each tile contains a different reward for the player: 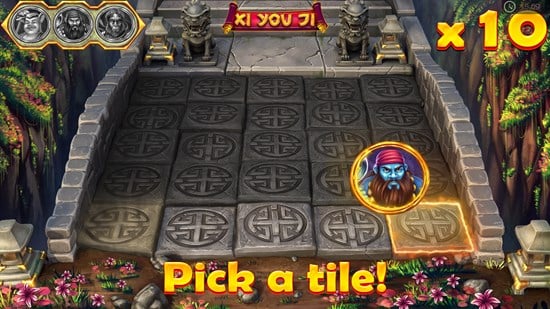 To play a round, configure your bet using the Bet Plus / Minus buttons, and press

or the “Spacebar” to submit the bet and initiate the round.

or the “Spacebar” will fast-forward the round to the round results, or in the case of multiple lines winning, will skip the win animation and start the next round.

The round can also be initiated using the Autobet / Autoplay.

Enables playing the game automatically for a predetermined number of spins at the current number of lines and bet configuration.

How to use the Autobet / Autoplay feature – Desktop

To open the Autobet / Autoplay, click on the icon next to the “SPIN” button.

To start the Autobet / Autoplay, click the play button on the bottom left corner. Once clicked, the play button will change to a pause button that will allow you to pause the autobet whenever you choose. You can only pause in between rounds/spins and not while the round is in play.

To close the autobet, click on the X sign on the upper right corner. During autobet play, the settings panel is closed.

How to use the Autobet / Autoplay feature – Mobile

above the “SPIN” button or click on the settings button on the bottom right corner and then on the autobet tab.

To activate a limit, you will need to click on the relevant checkbox and enter a numeric value on the right side (in the case of “Single Win”, “Win Limit” and “Loss Limit”) and click on the “START” button on the bottom right corner.

To exit the Autobet / Autoplay screen without starting the autobet rounds, you will need to click the “X” button on the top right corner.

After clicking on the “START” button, the game will return to the main screen and the “SPIN” button will show the autobet rounds counter.

To stop the Autobet / Autoplay, you will need to click on the autobet button again. Pausing the autobet is not possible in mobile mode.

When the limit's conditions are met, the autobet will stop and the relevant popup message will appear in the middle of the screen and fade out after few seconds. The messages for the limits will appear as follows: